Just days after Australia elected its first leader in many years who was able to display racial sensitivity, an outrageously anti-Muslim statement from previous prime minister John Howard did the rounds in South Africa, suggesting we needed a leader of his temperament.

Muslims who want to live under Islamic Sharia law were told on Wednesday to get out of Australia , as the government targeted radicals in a bid to head off potential terror attacks.

Separately, Howard angered some Australian Muslims on Wednesday by saying he supported spy agencies monitoring the nation's mosques. Quote: 'IMMIGRANTS, NOT AUSTRALIANS, MUST ADAPT. Take It Or Leave It. I am tired of this nation worrying about whether we are offending some individual or their culture. Since the terrorist attacks on Bali , we have experienced a surge in pa triotism by the majority of Australians.' 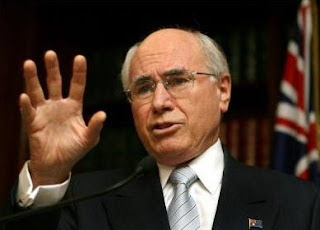 'This culture has been developed over two centuries of struggles, trials and victories by millions of men and women who have sought freedom'.

'We speak mainly ENGLISH; not Spanish, Lebanese, Arabic, Chinese, Japanese, Russian, or any other language. Therefore, if you wish to become part of our society. Learn the language!'

'Most Australians believe in God. This is not some Christian, right wing, political push, but a fact, because Christian men and women, on Christian principles, founded this nation, and this is clearly documented. It is certainly appropriate to display it on the walls of our schools. If God offends you, then I suggest you consider another part of the world as your new home, because God is part of our culture.'
'We will accept your beliefs, and will not question why. All we ask is that you accept ours, and live in harmony and peaceful enjoyment with us.'

'This is OUR COUNTRY, OUR LAND, and OUR LIFESTYLE, and we will allow you every opportunity to enjoy all this. But once you are done complaining, whining, and griping about Our Flag, Our Pledge, Our Christian beliefs, or Our Way of Life, I highly encourage you take advantage of one other g reat Australian freedom,
'THE RIGHT TO LEAVE'.'

'If you aren't happy here then LEAVE. We didn't force you to come here. You asked to be here. So accept the country YOU accepted.'

Maybe if we circulate this amongst ourselves, South African citizens will find the backbone to start speaking and voicing the same truths.

If you agree please SEND THIS ON

It is no surprise that many South Africans, accustomed to knee-jerk reactions in both politics and e-mail, did indeed pass on the message, as inflammatory as it was.
It is obvious that, in a multicultural nation, it is absurd to suggest such a stance is indicative of “finding a backbone”. However, it is equally absurd to believe that a prime minister – even one as jingoistic and racially insensitive as John Howard was – would issue such a statement.

The obvious way of checking on the veracity of such a message is to type a key phrase from the statement – in this case the title - into Google. If most of the search results are news reports, carrying the comments as used in the e-mail, then the message is likely to be based on factual events, even if still fanciful beliefs. However, if the results are all from obscure blogs and – even better – urban legends sites, then you would know without even clicking through to the results that something is fishy. If one of those results is from snopes.com or urbanlegends.about.com, then click through to find the full story behind the legend or hoax.

In this case, the background can be found on Snopes.com in an entry entitled Muslims out of Australia, dating back to 4 April 2006.

The bottom line is that the mail is an exaggerated version of several interviews with Australian government members, combined with older material. It started with a 2005 transcript of an interview with the Treasurer of the Australian government, Peter Costello. He was interviewed on a TV show called Lateline by Terry Jones on 23 August 2005 on the subjects of Australian values, Muslim clerics, anti-Americanism, and Telstra.

All of these comments were then attributed to John Howard, and combined with a 2001 editorial written by an American military veteran, to give the impression that it all came from a speech by John Howard. Ironically, the mail started circulating after Howard had held a two-hour summit with Muslim leaders in Canberra to work on a national strategy for addressing intolerance. While that may have been a case of a wolf being put in charge of the safety of the sheep, it was distinctly counter to the sentiments expressed in the supposed Howard speech.

Do we need “a leader like this” in South Africa? Sure, if we want to ensure that there is no hope of turning the corner from the fear and violence that the current crime wave has brought to our lives. Add political intolerance and fear, and the last vestiges of the rainbow nation that was born in 1994 will disappear.

However, the current atmosphere of dissatisfaction as a result of political corruption, uncontrolled crime and an energy crisis, is tailor-made for the emergence of new urban legends and the fuelling of old ones. The circulation of the John Howard legend in South Africa is one of the first examples of this emergence.