E-mail scares #4: Beware of the keychain!

Please be advised that there are people handing out key rings at intersections and stop streets... These key rings have tracking devices in them.... Kindly refuse them as you would be able to be followed if you accept it.... Please pass this on....

So goes the latest e-mail hoax warning doing the rounds. Promotional keyrings have indeed been handed out, but the warning barely stands up to the most cursory scrutiny. Yet otherwise sane and intelligent people are passing it around as an emotional warning to friends and family. 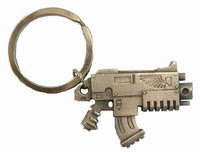 Think about it: is a hijacker or burglar going to track (never mind how this will be achieved, given that we are not living in a Hollywood movie) a car based on an anonymous signal, or rather follow a likely looking car home? That's a no-brainer for the crooks, so why can't the potential victims figure it out?

We always assume the bad guys have the upper hand, and that they are continually coming up with ingenious new ways to part us from our possessions. The truth is that most criminal methods are brutally direct and brutally simple.

With the increase in armed security services in many Johannesburg suburbs - protecting entire areas instead of responding to individual alarms - those suburbs are seeing a dramatic fall in opportunistic crime or planned home invasions, and a rise in follow-home crimes, where an individual is targeted at a shopping mall or in the traffic, followed home, and robbed before there is any opportunity for security services to respond.

Previously the criminals may have targeted a specific home and waited for the home owner to return. With active, armed patrols in some areas, this is becoming rare in these areas - but replaced by the occasional follow-home robbery.

The new urban legend feeds into the fear of the follow-home. However, it simply does not make sense, as the victims would have to be home already - in a fixed location - for the criminals to pinpoint them and track them down (assuming they have the technology!). By that time the intended victims are securely indoors, and the crime would have to involve immediate forced entry - a direct approach that is being shunned by criminals in these areas. When the criminals don't even know what security set-up they will be facing once the victim is located, the logic of this method becomes even further strained.

To put it in context, as an urban legend, here is another version of the same scare, sent as an e-mail warning last week:

SYNDICATES ARE GIVING AWAY FREE KEYRINGS AT PETROL STATIONS. DON NOT ACCCEPT THEM AS THE KEYRINGS HAVE TRACKING DEVICES WHICH ALLOWS THEM TO FOLLOW YOU.
FORWARD THIS TO ALERT FRIENDS & FAMILY!!!!

Same warning, different modus operandi. That would almost guarantee it is an urban legend. The clincher, however, as any reader of this blog will have spotted, is the call to "FORWARD THIS TO ALERT FRIENDS & FAMILY!!!!" Authentic warnings never rely on emotional blackmail.

The earliest report I've been able to track down of the urban legend surfacing in South Africa came on Friday, 23 August, when a listener called into the radio station RSG, as recounted on the MyBroadband.co.za blog:

There was a little frenzy on SABC radio station RSG’s daytime news program on Friday when a worried listener notified them of suspect key rings being handed out by petrol attendants at petrol stations. The listener reported that he found electronic gadgetry inside the hard plastic cover of the dodgy key ring upon closer inspection. Not only was there electronic gadgetry in there but the gadgetry was powered by a tiny little solar panel and was giving off a signal that could possibly be traceable.

I guess in today’s day and age one cannot be too careful with the ever advancing tech savvy criminal hordes pestering South African society. So interesting was this possible tracking device that the police got involved with a special unit focused on high tech crime. Their findings were that it could indeed be used as a tracking device but the method would be mad as the range of the signal was roughly one kilometer. A vehicle tracking company also tested the key ring and confirmed the signal, but said it would be quite useless for tracking vehicles with and doubted the efficacy of the idea if indeed it was meant as a tracking device.

It turns out the key ring is a promotional item released to the public to promote CALTEX’s Power Diesel brand. The key ring features a display similar to that of cheap mobile phones with the background flashing brighter and softer to attract attention to the CALTEX Power Diesel branding. The innards of this key ring are electronic in nature and feature a cool little solar panel at the back. The process of brightening up the display is probably the culprit generating the “signal” that got folks worried.

I was then informed by the Mail & Guardian that the first version they received originated from an employee at a security company. He had received the warning of the "new" criminal method from a friend who worked at Nedbank. It sounded serious enough for him to e-mail a couple of friends about it (using the wording at the top). Those friends then sent it to more friends, and soon it had reached thousands of Johannesburg residents.

By the time it reached the rest of the media, it had already been investigated by the police, who immediately announced that it was a hoax. The originator - who was merely distributing an urban legend that was already "in the wild" - confessed to the Mail & Guardian that he had been "stupid" not only to believe it, but also to pass it on. He is a rare breed of both honest and contrite urban legend scaremonger.

The original warning referred to here is reproduced as an image on Donovan Jackson's blog at the Shine 2010 web site. The interesting aspect of it is that the security company's name and address appear at the bottom of the e-mail, appearing to authenticate it, although no attempt is made by the sender to invoke the company's name as part of the warning.

The petrol station version of the legend this week usually claimed that it was happening at Caltex service stations. This, reported Talk Radio 702, was promptly denied by Caltex. However, the Caltex spokesperson did acknowledge to 702 Eyewitness News that promotional keyrings were being handed out at service stations. They reported on 28 August:

Fuel retailer Caltex has assured customers that key rings being handed out at petrol stations do not have tracking devices fitted into them.
A hoax email is currently doing the rounds warning people the key rings have a tracking device fitted to them which is used to follow people home, where they are then robbed.
Caltex's Geraldine McConnach says their promotional key rings only have flashing devices.
Gauteng police say there have been no reports of anyone being followed home after receiving a key ring and they also consider the email to be a hoax.

During an on-air interview with 702's David O'Sullivan that afternoon, he told me that listeners were still inundating the station with calls insisting the story was true, and some had even sent through photos of keyrings, as if that constituted proof!

If you really want to see it in action, a video of the device is also available on YouTube, posted there on 23 August by Antowan, who had also posted the MyBroadband report on the surfacing of the legend that same day.

While legendary urban legends debunker Snopes does not include it formally on his web site, it is discussed in the Snopes message board, where the following variation is on offer, going back all the way to February 2000, and originating from outside the United States:

WARNING: this happened to Andre yesterday.

He put petrol in his car and the petrol attendant gave him a key holder - Free!

Back at work he noticed something funny - a copper plate standing out.

It had a sticker on the key holder, he pulled it off. With the key ring being transparent, he noticed a type of SIM card inside.

He opened the key holder just to find a miniature transmitter which works with sun power.

He took it to the Police Station and the Police said that they were aware of it - it is used to follow you home and hijack your car/break into your home.

To the credit of his (American) readers, they immediately come up with the two key arguments against the veracity of the warning. The first is on grounds of logic:

I don't get what the utility of this scheme is supposed to be. How does knowing where random strangers live make it any easier to steal their cars or break into their homes? How is this any better or different than simply following/robbing victims wherever the crooks happen to encounter them or just randomly targeting houses?

The second is a technical argument:

RFID tags are so small because they have no internal power source - the power is induced by an EM field at the base station.

While GPS devices can be very small and operate on very low power, to transmit their location they need to send a signal a significant distance - i.e. to the nearest cellphone tower - and that means it needs to have a relatively bulky battery. The smallest GPS tracking devices today are the size of small cell phones (since that's exactly what they are) and at best can send a location fix every hour for the better part of a day.

Such a device would not be confused with a small non-electronic device.

Nevertheless, despite all the obvious clues, and an inevitable string of media warnings to ignore the warning, the novelty of the warning and its brevity make it a natural to transfer from e-mail to SMS.

Expect it on a cellphone near you soon.

Nice post about key chains, Key chains and Keyrings are useful and versatile item. You can be used for appreciation gifts to school students, customers.

Good to see this helpful information here, Thanks for sharing with us....