The Micro Frog of Floral Doom

It is the start of Arum Lily season. A tiny endangered Arum Lily Micro Frog breeds inside the water and dew held in the cup of these Lilies. We are desperate to curtail the gross destruction of Lilies. Please don't buy Lilies sold at traffic intersections.

Would you please do a tiny bit, and just FWD this email?

As Spring was about to be sprung, this warning spread faster than frogs in breeding season. During August 2010, it began doing the e-mail rounds, and was then taken up by blogs and community web sites. The popular Urban Sprout blog reported on 12 August:

Arum lily season is here! You'll know this because at any number of lights around the city, some well-meaning chap will thrust a bunch at your window. And the temptation to buy these gorgeous flowers is enormous.

I've been aware that one shouldn't buy as they're being picked in the wild, destroying the natural balance of what remains of the natural wetlands, wild places and roadsides along which they grow (they're regarded as one of the wild flowers of the flower route and indicated in reports on the flowers).

But what I didn't know is that the endangered arum lily micro frog breeds in the water and dew held in the cup of these lilies.

The Cape Tourist Guide Association came over all sentimental, headlining their version of the plea, "ARUM LILY Micro froggie – PLEASE". They then ran the exact text that went with the e-mail version quoted above, as well as this image that accompanied the e-mail: 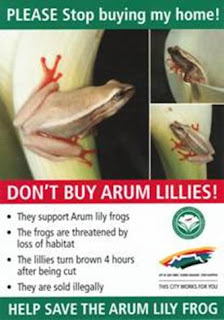 It is an urban legend, cobbled together from two distinct species of frog, the sprouting of flower sellers on the streets of Cape Town as spring approaches, and good old fashioned misinformation. Mix in the discovery of a new species of micro frog as the urban legend was spreading, and suddenly our inboxes were no longer safe from the amphibian invasion.

The City of Cape Town made a valiant effort to quell the legend, issuing a formal statement on 30 August, along with other relevant authorities, namely Cape Nature and the South African National Biodiversity Institute. It was a masterpiece of measured, balanced analysis, in classic urban legend debunking style, although it does not use the term "urban legend":

Setting the facts straight on arum lilies and frogs
The City of Cape Town’s Environmental Resource Management (ERM) Department has noted that inaccurate information is circulating about the sale of arum lilies, and the protection of two of the Cape’s amphibians, the arum lily frog and micro frog.

A campaign urging residents not to purchase arum lilies from vendors at the side of the road seems to be gaining momentum whilst spreading inaccurate information about arum lilies and frogs. This misleading information has also gone viral, and is being spread via e-mail and social networking tools. It is important that the public understand the facts about these frogs, before making a decision on whether or not to purchase the flowers.

The ERM Department, in conjunction with CapeNature and the South African National Biodiversity Institute would therefore like to highlight the facts.

The information being circulated refers to the ‘arum lily micro frog’ which does not exist. There are, however, two different species of frog, namely the micro frog (Microbatrachella capensis) and the arum lily frog (Hyperolius horstockii). The micro frog is smaller than a fingernail, while the arum lily frog is somewhat larger, growing to about 40 mm in length. It has been reported that the ‘arum lily micro frog’ is in danger because of the sale of arum lilies, but this is not at all correct for either of the frog species.

The supposed threat to these frogs’ habitat has been cited as one of the main reasons why the public should not buy arum lilies. However, no frog species breeds in the flowers of arum lilies. While the arum lily frog occasionally uses the flowers for shelter, it is not dependant on them. Arum lily frogs breed in wetlands and not in the flowers of the arums. The micro frog is ground-dwelling, breeding in temporary pools, and it does not climb into any flowers.

Arum lily frogs are very pale and they hide their bright orange feet and legs under their bodies during the day. In this way, the frog is able to use a white background as camouflage against predators and this background is sometimes the white arum flower. They do not use the pollen of the flowers to camouflage themselves, as has been suggested.

While arum lily frogs are only found in the Western Cape (and a small area of the Eastern Cape), they are not classified as threatened in the 2004 Red Data book. However, it is true that the species is becoming increasingly rare as their habitat is lost to urban development.

“The ERM Department is always grateful when residents spread its messages because the need for awareness is so great. Unfortunately, this message has become lost in translation, and we hope that the correct information, as it appears above, will spread in the same manner,” said the City’s Biodiversity Co-ordinator, Clifford Dorse.

The ERM Department is currently updating its pamphlets on frogs and lilies, and will distribute them widely in an attempt to ensure that the public receives the correct information.

How did the legend start? It appears the very balanced folk at the City of Cape Town may themselves have played a role in it. However, it caught fire through the confluence of three biological facts.

The first is that the Micro Frog, known scientifically as Microbatrachella capensis, is indeed an endangered species, and is found only in the Western Cape. The IUCN Red List of Endangered Species describes the frog and its habitat in great detail. It does not mention Arum Lilies. It reports that the frog lives in sandy, coastal fynbos heathland.

Then there is indeed an Arum Lily Frog (or Hyperolius horstockii). The web site of the Two Oceans Aquarium describes it and carries, in urban legend source terms, a dead giveaway:

Arum lily frogs shelter in the flowers of the arum lily during the day. They use the pollen of the flowers to camouflage themselves. At night they creep out of the flower and down the stem to hunt for insects.

They are threatened because arum lily flowers are picked and sold.

If you look very carefully you might find these little creatures hiding in an arum lily flower. Look out for their bright orange feet.

Please don’t pick arum lily flowers or buy them from the road side – you might end up taking a frog home with you!

No mention of a micro frog or breeding in the flower, of course. The arum lily is in fact a source of shelter, camouflage and food. But there lurks half the e-mail warning doing the rounds during August 2010.

The third fact was the discovery, in Borneo, of the smallest species of frog in the world, during August 2010. It was reported in scientific terms on 19 August (download the article as carried by Zootaxa here ) under the rather unscientific headline, Old World’s smallest frogs crawl out of miniature pitcher plants on Borneo.

And on 26 August Conservation International reported the finding like this:

The mini frogs (Microhyla nepenthicola) were found on the edge of a road leading to the summit of the Gunung Serapi mountain, which lies within Kubah National Park. The new species was named after the plant on which it depends to live, the Nepenthes ampullaria, one of many species of pitcher plants in Borneo, which has a globular pitcher and grows in damp, shady forests. The frogs deposit their eggs on the sides of the pitcher, and tadpoles grow in the liquid accumulated inside the plant.

Yes, no great leap from this breeding environment to the emergence of the Arum Lily Micro Frog.

After the City of Cape Town issued its correction, it also supplied the statement quoted above to the Urban Sprout blog, and added:

I’m guessing that this was based on the articles in the Bolander (11 August) or the Saturday Argus (7 August)? Unfortunately these articles contained some factual errors, and we have sent to following information to the papers:

We realise that some of the information was taken from one of the City’s pamphlets which, in hindsight, may have been ambiguous in its wording. We apologise for this – we are currently updating this pamphlet.

The pamphlet itself has not been quoted in any of the warnings, but it is clear that half-facts have been bundled together into the first urban legend of Spring. Astonishingly, even on blogs where the City statement was published, readers left comments to the effect that they had not been aware of these frogs, and would in future alert police about flower sellers hawking arum lilies.

As they say about headlines in tabloid newspapers, never let the facts get in the way of a good urban legend.
Posted by Art at 06:37 1 comment: